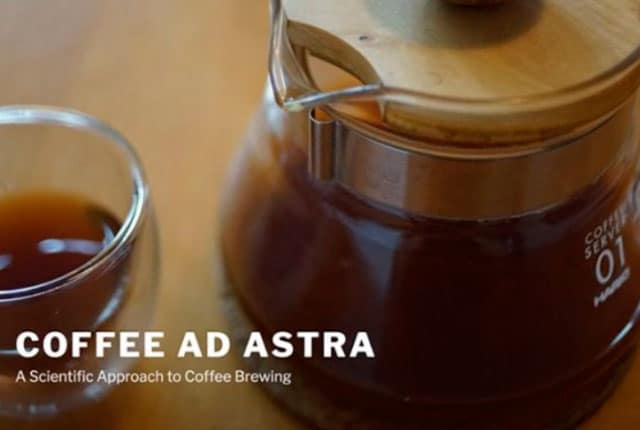 When astrophysicist Jonathan Gagné isn’t searching for exoplanets outside the solar system, you’ll likely find him at his kitchen table exploring the never-ending complexities of specialty coffee. Jonathan, an astrophysicist who started the coffee blog Coffee Ad Astra, is currently pursuing a second postdoctoral fellowship at the Institute for Research on Exoplanets at the University of Montréal. In his free time, he explores and diagnoses complex issues around coffee brewing.

Jonathan first became interested in coffee while he was living and working in Washington, D.C. “I realized that when I moved back to Montreal, the coffee I brewed in Montreal was worse than the coffee I brewed while living in D.C.,” he says. “And I didn’t understand why. So I wanted to find out.” During a business trip to Los Angeles, he took a brewing class from Copa Vida and started bringing a Hario V60 with him when he traveled. “I noticed the same coffee would taste different in each city I brewed it,” he said. “The brewing method and the grind was always the same, but the brew time would be longer or shorter. Or I would get different tastes depending on where I was. That’s when I really started to conduct research about it.”

Jonathan gathered data on coffee brewing and documented each of his brew methods. He published his results to Coffee Ad Astra, relying on his scientific background to conduct his experiments. “Analyzing data and writing science articles really shaped me into doing things systematically for coffee brewing … and to better understand the sources of uncertainty in what I observe,” says Jonathan. “In science, you often know how uncertain a measurement is, and you want to know exactly how it impacts your results. For example, I know that my scale has a 0.1 gram accuracy, and my refractometer has a 0.01% accuracy (if used properly). Knowing this, I can calculate exactly how these errors translate into my calculation of the average extraction yield of a brew. So I always consider this in my research.”

To date, Jonathan has performed more than 50 in-depth experiments on vague and unexplored topics in the coffee industry. He’s illustrated several coffee varietal tasting wheels of each major coffee variety. He’s examined 13 different paper filters at a microscopic level, showing the different weaves of each filter and how it affects the flow rate. He’s even created a custom computer application to measure ground coffee particle sizes under a microscope and monitor how they shift in a drip cone during a brew.

“The computer codes I create use methods and algorithms that I learned or developed during my astrophysics research. Now I apply them to my coffee research,” Jonathan says. “My background as a scientist has helped me identify what variables make my coffee brews less repeatable,” he explained, continuing, “and in science, you only change one variable at a time to understand the effects of each variable independently. So, for example, I generally avoid changing both the brew temperature and grind size at once when I dial in a new coffee bag.”

As Jonathan wanders further down the rabbit hole of coffee science, he’s begun to narrow down which variables he thinks might be more important than others. “One thing I noticed with filter coffee is that each coffee should have a different brew time. If you try and brew different coffee at the same time, it will affect the taste,” he says. “Another thing I suspect that is very important, which is not easy to measure, is the flow in which water comes out of the drip cone. If it goes below a certain velocity then you get a very bad taste.” Jonathan explained that two scales connected to a computer are required to measure the flow rate. But one of his future projects is working on a solution to quickly measure this. “If I visually see that the flow is slow or fast, I change the grind size so the flow will be above a certain threshold.”

As Jonathan finishes his second post-doctoral fellowship in Montreal, he has no intention of slowing down with coffee research. One ongoing experiment he is working toward is a data compilation project that is over a year in the making. Jonathan has been cataloging every single brew he’s done along with how he’s brewed it, the equipment used, and the variables he’s changed. He intends to publish it in the coming months with results that could potentially change the way coffee professionals brew pourovers.

“I’ve realized that a lot about coffee is [still] poorly understood,” says Jonathan. “I want to be able to contribute to what research is already out there.”

Jonathan’s work can also be found on his Patreon page and in a Telegram chat group.

*Disclaimer: The author is a monthly contributor to Coffee Ad Astra’s Patreon.

ABOUT THE AUTHOR
Craig Batory is a coffee professional, journalist, and digital marketer currently based in Detroit. You can reach him directly at hello@craigbatory.com.

Select the fields to be shown. Others will be hidden. Drag and drop to rearrange the order.
Compare
Wishlist 0
Open wishlist page Continue shopping